A prototype game for the TOJam 13 game jam. It's not much of a game but you can click on things and build things.

My goal for the jam was to

My goals for the game design were to make a Civilization-inspired idle game with a map that could be used to explore the effects of networks on society. Unfortunately, about 2/3rds of the way through the jam, I had coded up the basic mechanics, but I realized it would never work as a game because of UI issues. There wasn't enough time to start a new game, so I just spent the rest of the time doing some superficial clean-ups to the mechanics, but I didn't bother deepening it into a real game.

I'll now try to unpack what I meant by all that. I occasionally like playing idle/clicker games, but I tend to get bored after a couple of hours. I really like playing idle games that happen on maps though, like Endless Expansion or Reactor Idle. I think the idea of making a Civilization-inspired idle game like Civ Clicker is good, but I feel having a map is really important to capturing the feel of Civilization, so I wanted to explore that a bit.

When I initially played Civilization 6, I liked how unstacking cities helped make the "building" part of Civilization more interesting. It seemed almost interesting enough that the combat might not be necessary if it was fleshed out even more. And I started wondering what would happen if you pushed that idea further. Why have cities at all? Why can't you build anything anywhere? It also made me think about the importance of networks.

Civilization has traditionally focused on buildings in cities but only lightly examined the importance of network infrastructure. One of the most important pieces in how a civilization and its cities grows is in its network infrastructure. Building that sort of network works really well on a map too. Would it be possible to build a map-based idle game where you improved your civilization by building road networks, canal networks, rail networks, highway networks, electricity networks, telegraph networks, telephone networks, mobile phone networks, high speed internet, aqueducts, and other such networks? It seemed like having a simulation that modeled the effects of these sorts of networks might let players explore some interesting scenarios. For example, developing countries now attempt to leap-frog ahead in technology by skipping the construction of certain types of networks, or they'll build the networks in the wrong order. They'll build the highway network before a rail network, and they'll jump straight to a mobile phone network without building a telegraph network. Such a game could be used to explore why towns and cities are always the same distance apart or the influence of geography on networks and how a civilization grows. Some people argue that large empires collapse because the large communication times between different parts makes them ungovernable. There seemed to be a lot of interesting possibilities there.

I decided to try modeling the effects of networks by allowing resources to travel over the map, but have the resources deteriorate the further they needed to travel. So if you had a farm on one square, the food from it could feed a town on an adjacent square, but half of the food would waste away during transit. If the food had to travel two square, than 3/4 of it would waste away. Building certain types of networks would reduce the deterioration of certain types of resources. For example, a road might allow food to travel faster, so less of it would get wasted. The Internet allows knowledge and commerce to travel more efficiently, so it can travel longer distances between cities. Unfortunately, this gets complicated because resources can be produced anywhere on the map and those resources might be consumed anywhere on the map, so there's a crazy optimization involved in figuring out which resources should go where, and what is the most efficient way of doing that.

I suck at math, and I dropped my course on the simplex method, but I hacked together a lame approach that would produce something playable. People could do hunting and gathering in the forests or work on farms to produce food. And the food would be distributed around to houses/cities. People would die if there wasn't enough food. After playing with it a bit, I realized that it would never work as a game. The problem was one of UI. It was impossible to understand where resources were flowing to and how much of it was being wasted in transportation. There just wasn't a good way to present so much information on the screen in a way that anyone could understand. People would die in one city because the food from a farm two squares away was being diverted to a different city. How can you even show that on a screen?

Now, as a I mentioned before, there are idle games with resources flowing on maps. But this was complicated because the resources were automatically consumed as they were created (instead of accumulating), and people would starve if there were insufficient resources. Again, there are idle games with food resources that are automatically consumed and that have starvation if there is insufficient food. But having a game that has all those things, plus resources deteriorating over distance, as well as multiple resources is just too complicated for anyone to really visualize.

I imagine there might be a way to simplify things enough. I tried to eliminate starvation, and made resources only go up unless you used them to build things, but it got messy because of the deterioration of resources over distance. Where should the resources be stockpiled, and at what transportation cost? I was thinking of reducing everything to a single city where all the resources would have to travel after being harvested, but that would require a complete rethinking of the game, so I didn't get to that.

Well, it's too bad. I feel I have greater insight into the designs of idle games and map games now. I still think a map game involving networks might make an interesting game, but I'll have to think some more on the design first.

Update: I had another go at trying to make a game based on networks. This one also didn't quite work right. I think having resources automatically flow across networks is actually a mistake. If people don't actually see how resources flow from one location to another, then they won't understand how to optimize it by building a better transportation network. I think I need to make yet another design that goes one step lower, where players actually have to specify which resources should flow where. Also, I moved away from a model where resources are constantly consumed to one where resources are only consumed when new buildings are built. That ended up feeling wrong. It encourages the building of one giant city instead smaller villages. The original model of resources was better. 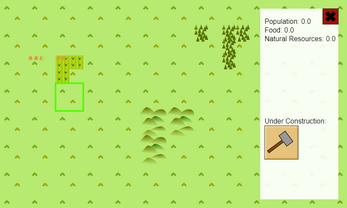